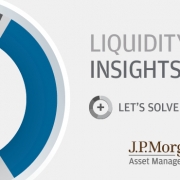 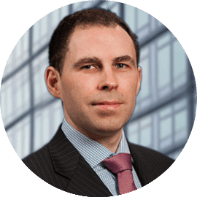 At the beginning of October, the Reserve Bank of Australia (RBA) cut its overnight cash rate by 25bps to a new record low (Exhibit 1a).  The third rate cut in five months has effectively halved the central bank’s key policy rate – leaving the RBA in uncharted territory and one step closer to unconventional monetary policy to achieve potentially unattainable employment and inflation goals.  The current trajectory of cash rates will have significant and far-reaching implications for local currency cash investors.

Despite this professed optimism, the RBA still cut rates in October and remained dovish, committed to “ease monetary further if need to support sustainable growth in the economy, full employment and the achievement of the inflation target”2. However, given current lack of macroeconomic drivers to achieve the central banks full inflation of 4.5% was last reached in 2008 and core inflation target of ≥2% (Exhibit 1b), the probability of attaining either goal remains remote.

The reality is more nuanced: While Australia is currently in its 28th year of economic expansion, gross domestic product (GDP) growth has slowed to a decade low; moreover the rising participation rate is offsetting almost 2-years of positive jobs creation and despite the recent recovery, housing prices have fallen below their long-term trend.  Meanwhile, the long term slowdown and rebalancing of the Chinese economy will eventually weigh on exports – although short-term Chinese infrastructure stimulus will benefit Australia’s commodity driven economy.

Apart from weak global growth, the RBA’s other key domestic concern remains the lack of growth in domestic consumption – especially during a period of rising employment.  However, this can partly be explained by job insecurity, muted wage growth and the high level of consumer indebtedness (Exhibit 2a).  All these factors should still benefit from lower interest rates – suggesting that monetary policy remains an effective policy tool – provided commercial banks pass the rate reductions on to consumers.

Interestingly, for the first time, the RBA alluded to a new rationale for the latest rate cut.  The structural shifts in global interest rates (Exhibit 2b) – which have fallen to record lows have also placed downward pressure on Australian interest rates.  The central bank fears if it ignored the actions of major central banks, the “exchange rate would appreciate, which in the current environment would be unhelpful on terms of achieving both the inflation target and full employment”3. 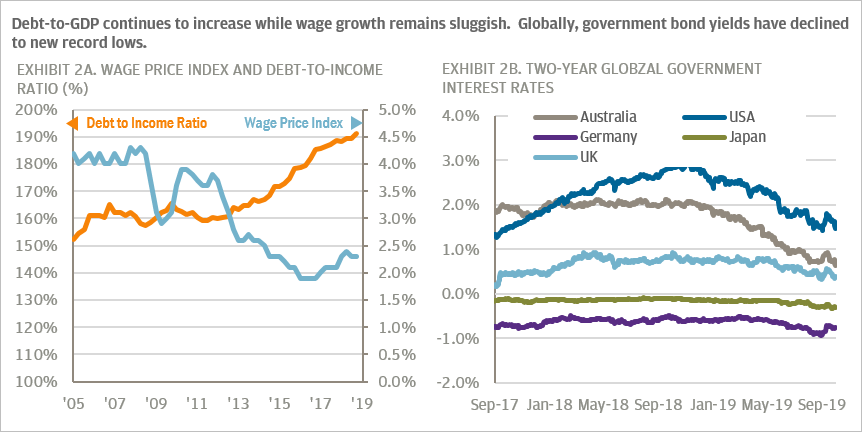 For Australian cash investors who are more familiar with high interest rates, steep yield curves and competitive deposit rates, the prospect of extremely low or even zero yields represents a significant challenge.  These difficulties have been compounded by the Royal Commissions impact on commercial banks demand for deposits and the Australian Prudential Regulatory Authority’s (APRA) clarification on the definition of cash.

Nevertheless there are several techniques developed and refined during the past decade of zero US interest rates which should help Australian corporate treasurers mitigate some of these complications.  These include diversifying beyond deposits into money market funds and ultra-short duration funds,   segmenting cash by liquidity requirements and identifying sectors and tenors that offer additional return for minimal reductions in liquidity and security.

Although combining these three techniques will not fully offset the negative impact of RBA rate cuts on cash returns, they will allow treasurers to achieve a competitive return consistent with the objectives of capital preservation and maintaining a high degree of liquidity.