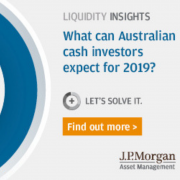 The Reserve Bank of Australia’s (RBA’s) overnight cash rate has been unchanged at a record low of 1.50% for a record 28-months (Exhibit 1A). Throughout 2018, the central bank’s meeting minutes and speeches suggested that rates remained appropriate — implying a broadly neutral policy stance — while hinting that the next rate movement would be higher, albeit with “no strong case for a near- term adjustment in monetary policy”(1) .

For most of 2018, forwards markets agreed with the central bank and were firmly pricing in future RBA rate hikes — but this has abruptly changed (Exhibit 1B) with the market now indicating a 50/50 chance of a rate cut in 2019. This rapid reversal could exert substantial influence on the central banks thinking with significant implications for money market and fixed income investors.

Historically, Australia’s twin engine economy has been a source of strength, with the combination of commodity exports and domestic demand helping the country avoid recession for a record-breaking 27-years. In the past half-decade, as mining infrastructure investment waned, a booming housing market — with prices jumping by 45% between 2012 and 2017 – replaced it as the key driver of economic growth.

Throughout 2018, solid business sentiment, an improvement in capital expenditure intentions and a tight labor market — with strong hiring momentum and an up-tick in pressures – encouraged the central bank’s belief that inflation would move higher — implying the need for future rate hikes. But weaker housing, sharply lower business sentiment and softer domestic demand are already impacting growth and are challenging the viability of the RBA’s optimistic 3.5% 2019 GDP forecast(2). The hawkish bias is also being questioned as the RBA has never hiked interest rates during a housing market downturn (Exhibit 2B).

The path of least resistance

Economic growth will likely slow in 2019, albeit from a previously robust level. However, fears of a property price crash are likely overdone: Low unemployment and low-interest rates suggest mortgage payments remain affordable and most homeowners still enjoy positive equity. Little mortgage borrowing was completed at the peak which was perceived by many as unsustainable.

Finally, even if the economy slowed faster than expected, the RBA has capacity to cut base rates if necessary and the government’s improved fiscal position has given it the ability to cut taxes or boost spending if required.

Given this backdrop, the RBA is likely to strike a more neutral tone in meeting minutes and revise down its 2019 GDP forecast while keeping base rates unchanged for the foreseeable future — further extending its record-breaking period of inertia.

For cash investors, this suggests that money market yield curves could flatten further, although the recent tight liquidity conditions represent an excellent opportunity to extend duration and lock in attractive longer tenor yields.